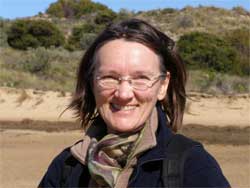 Sabine is Associate Professor for Marine Biology at the Flinders University in Adelaide. She worked extensively on the ecology of temperate and tropical tidal wetlands of the North Sea, Australia and elsewhere. The research carried out by her team targets coastal ecosystems, looking into spatial and temporal patterns of macro-invertebrates, functional diversity, colonisation, species interactions and trophic ecology, as well as invasive species. She is also carrying out regular monitoring in the Coorong, to assess the food availability for migratory waders and the response of benthic invertebrates to changing environmental conditions. Amongst a busy lab and heavy teaching obligations, Sabine was Director of the Lincoln Marine Science Centre in Port Lincoln from 2007-2012. She is further supporting the translation of science into management through her membership in science advisory groups and the Marine Park Council in South Australia. She was recently appointed as a member of the Expert Scientific Panel for the review of the Commonwealth Marine Reserves.

Sabine’s background is in zoology and she obtained a PhD at the University of Goettingen, Germany, in 1987, with a project on mussel bed communities and biodeposition. She received further training in marine ecology in Woods Hole, before heading down under for the first time for a three year postdoc at AIMS on species interactions in tropical tidal flats. Back in Germany, Sabine became project leader for an interdisciplinary ecosystem analysis on the Wadden Sea for seven years, targeting the analysis of stability properties. Alongside, she was affiliated with the Centre for Tropical Marine Ecology, and teaching at the University of Bremen, where she still holds academic status after her ‘Habilitation’ in 2001. Sabine moved to Australia for good in 2004.

Sabine became a member of the SA state branch of AMSA when it re-formed in 2005 and joined the National Council in 2007. When she became Vice President in 2010, Sabine also took on the role of representing AMSA at OPSAG (Oceans Policy Science Advisory Group, now renamed to National Marine Science Committee (NMSC)), and continues to do so, including being on the Executive Committee of the NMSC since 2014.