The success of the AMSA 2019 conference was not from re-inventing any wheels – it was based on the experiences gained from past conference organisers, feedback from past attendees, navigating through sustainability do’s and don’ts, choosing fabulous event managers, and packaging all of that up into an eventful, science packed week. We even kept some aspects exactly the same as AMSA 2011, the last time the conference was in Fremantle, because it worked so well. One piece of advice we received early on was to fill the committee with a diverse range of members, and that we did, with 20 organising and scientific committee members dedicating their precious time over 18 months. An extra big thanks to Chair and Co-chair of the scientific committee, Charlotte Robinson and Jennifer Verduin for pulling together some great science!

Because we all love stats, we think the conference did significantly well with a sample size of 595! Thankfully not all presented otherwise we’d still be sitting at the Esplanade downing the barista coffee on offer. There was a total of 311 oral presenters and 46 poster presenters spread across five concurrent sessions, 28 symposia, four social functions and nine workshops (including a few sneaky lunchtime workshops). We apologise if you’re still recovering ...

The conference was so jam packed that we didn’t want to confuse our delegates with too many event locations, so the conference was unofficially opened at the Esplanade Hotel itself during the Welcome Reception on Sunday 7 July 2019. The evening kicked on to a very respectable hour and set a positive and exciting mood for the days to come.

The conference was officially opened with a Welcome to Country by Marie Taylor, a proud descendant of the Whadjuck/Barlardong Noongar people. We were honoured to have Marie wish us well for our conference, just as she did in 2011. Following Marie was an entertaining welcome from Professor Peter Klinken, Chief Scientist of WA.

Our first plenary session of the week, fitting in perfectly with the theme ‘Blue Economy’, was kick started by Tim Moltmann (IMOS) and Dr Peter Macreadie (Blue Carbon Lab) talking about the development of Australia’s blue economy and the future of blue carbon science. This led into a Q&A on the blue economy that got the audience engaged even further. To round off the morning, and follow on from the AMSA 2018’s great idea, poster presenters and exhibitors were given the chance to present rapid one minute talks with the primary aim of enticing the audience to come and learn more – which many did with good humour and wit! Fast-forwarding past five parallel sessions that included some oceanography, ocean stewardship and benthic communities, we transitioned into the Joe Baker Poster Session, held on Monday evening at the Esplanade Hotel. The crowds rolled in, more so than we anticipated, and the evening quickly livened up as a lot of research and knowledge was shared amongst young and old, over a delicious bowl of paella from the live cooking station! 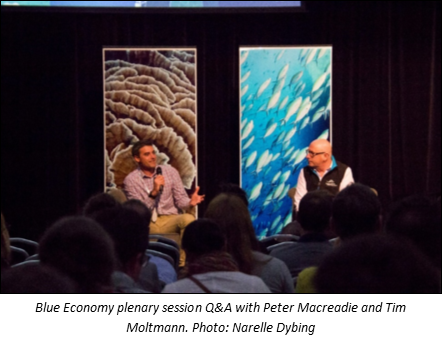 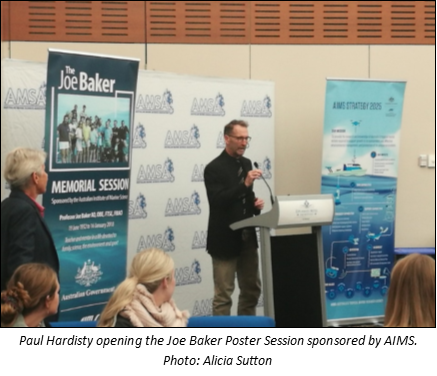 Day two was opened by Brett Louden receiving the AMSA Technical Award, and although Brett couldn’t join us, he did send through some fitting field work visuals while the presentation was given. Following on from Brett was our second plenary address, given by Dr Cass Hunter (CSIRO) on coastal Indigenous livelihoods. Cass gave the audience a great insight into her journey of becoming a scientist, and how we can look forward with Indigenous leadership and vision. Tuesday was quite a packed day with back-to-back talks across five concurrent sessions on a diverse range of topics from marine extremes and their impacts to ecological research that informs management, and only a day and half in, those coffee stations were getting a workout. Luckily some reprieve came during the Student Night, which was held at The Local Hotel, a nice leg stretch distance away, and organised really well by the WA branch student reps. Pat on the back team! The Student Night was a success and students always do a good job of inviting mentors, and some mentors do a good job of inviting themselves ... why wouldn’t you! It all led to a fun, packed, informal evening and having it early in the conference meant that new connections and conversations could continue throughout the week. 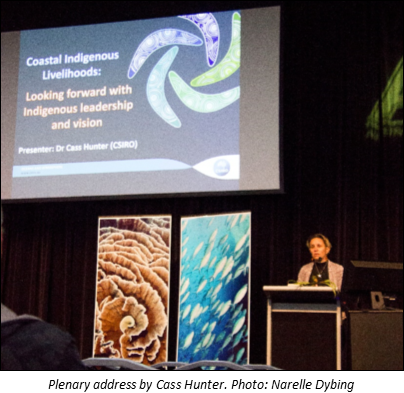 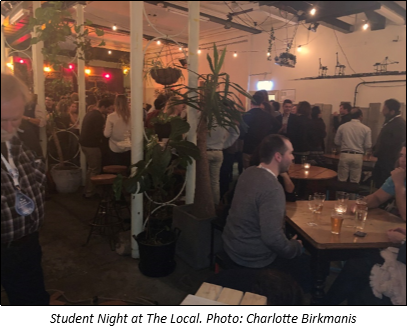 Wednesday morning started with an engaging AMSA Jubilee presentation by Emeritus Professor Helene Marsh. The audience had the pleasure of taking in a wealth of dugong knowledge! Dr Pia Winberg (Venus Shell Systems) followed with an inspiring and food for thought plenary on sustainable and nutritional food production in aquaculture, particularly seaweed! Nine different symposium sessions were on offer for the rest of the day including ports and coastal marine management challenges, mesophotic and deep-sea ecosystems, blue restoration and earth observations in aquatic environments. Wednesday also held the first session of the AMSA2019 Indigenous workshop which gathered ~ 60 Indigenous, marine science and marine management participants in the one room to share their views on better ways of working together on sea country. This workshop aimed to build on previous workshops at AMSA conferences and promote the establishment of collaborative and respectful partnerships for sea country research, and Wednesday saw the workshop off to a good start. I was fortunate enough to be invited to the workshop and, as an early career researcher, it was an invaluable experience. Wednesday evening allowed rest for some, but for others, it was off to the public lecture on thinking globally and acting locally on plastics, given by the Founder and Director of Plastic Free July, Rebecca Prince-Ruiz. 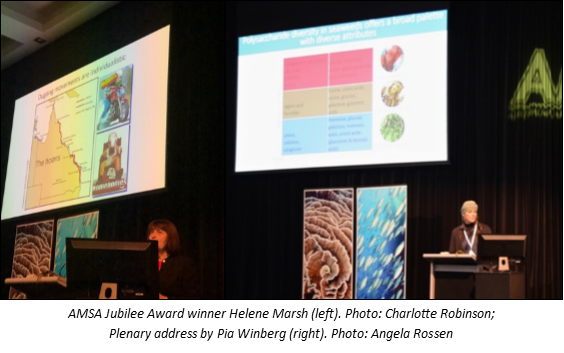 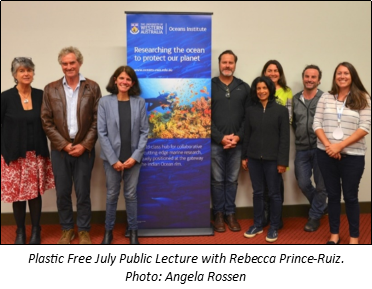 Thursday was a long day, but worth it! The second session of the Indigenous workshop began in the morning with an Indigenous ‘in camera’ session. Happening at the same time was a presentation by the AMSA Allen Award winner, Kate Dodds, on living seawalls! The last plenary session of the conference was on the hot topic of fisheries and sustainability. The plenary included two invited speakers, Prof Graham Edgar (IMAS/UTAS) talking on the roles of science and politics is setting sustainability targets, and Dr Ana Parma (CONICET, Argentina) talking on the progress and challenges in attaining sustainability targets. There was a longer Q&A that followed both plenaries, and two additional invited guests, Dr Dan Gaughan (DPIRD) and Prof Neil Loneragan (Murdoch University) joined the panel to contribute their views and knowledge on the topic. The discussion that followed was constructive, informative and of great value to the audience who commented that they were keen to see more Q&A panels on hot topics at future conferences. That was just the morning! Morning Tea was combined with the Promoting Women in Marine Science Panel and we were lucky to have Prof Erika Techera facilitating a discussion between Prof Michele Burford, Dr Marji Puotinen and Dr Karen Alexander. The symposium topics planned for the rest of the day ranged from fish and fisheries, artificial structures, marine megafauna and seafloor mapping. The third and last session of the Indigenous Workshop was also held in the afternoon and some clear directions and opportunities were highlighted that will see further development as the months progress. 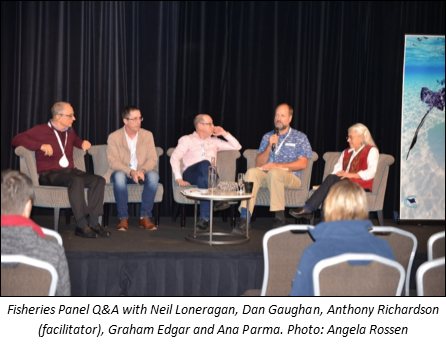 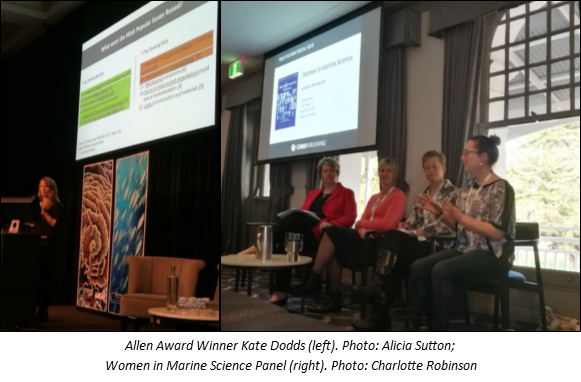 The conference dinner was exciting and stunning. It was hard to imagine how the theme and decorations would all come together, but we were happy to trust the amazing work of the Encanta team. The conference dinner was the last impression the conference would have on delegates, and the aim was to provide an atmosphere that was fun, a bit dorky and give that ‘ahhhhhh’ moment of relief that a busy week was done and dusted! That aim was easily facilitated with good music, food and drink. Doc Reynolds from the Tjaltjraak Community, Esperance area was invited to the stage to share his views on the success of the Indigenous Workshop, which was valuable for all delegates to hear. Student awards were presented throughout the evening and a big congratulations to all! There was tough competition for the Sherwood Award (AKA the best dance moves around town!) which was judged by a student panel. The 2019 award went to Euan Harvey who brought very energetic dance moves to the dancefloor! What a shame the evening had to end at 11pm, well 11:15... thanks for the last couple of songs Diamond Road! 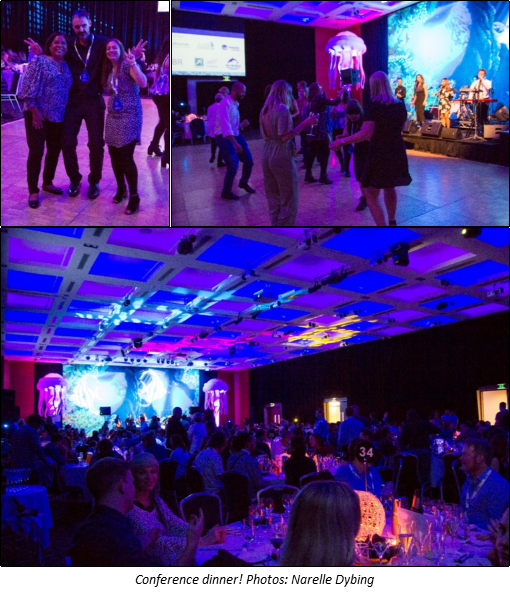 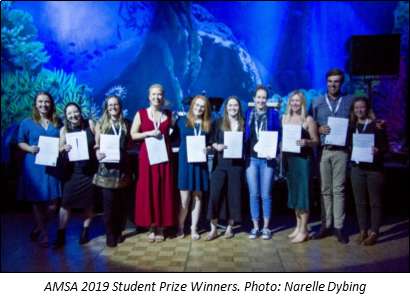 Reflecting back on the conference, a real highlight for the committee, and for delegates, was that a conference of ~600 delegates could be done plastic free. The push to be as plastic free as possible was continually reinforced by the committee from the start. It was a team effort. It involved having Encanta on board with the right providers, the Esplanade on board with minimising plastic in their daily undertakings, exhibitors limiting plastic giveaway products and also the delegates taking responsibility for their personal use items during the conference. The plastic free efforts of the conference gained a lot of traction after an article in The Conversation was written and published by some of our dedicated committee members! The article has even been translated into multiple languages and we hope it can help other conferences and events to go plastic free. What’s more – it was relatively easy to do and didn’t really impact on the budget. 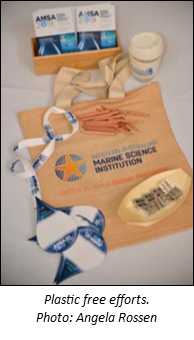 A big thank you and appreciation goes to all of our sponsors and exhibitors! A conference can’t be as successful without your support, and it’s because of that support that we could offer as much as we did to enhance the delegate experience. We are also thankful to workshop organisers for organising and hosting a range of optional workshops that rounded out the conference program well.

The handbook of program and abstracts is available to AMSA members after the conference.
>> Click here