Wollongong is located on the NSW South Coast. The area boasts a wide range of coastal and estuarine habitats including relative pristine areas such as the Jervis Bay Marine Park as well as the major industrial harbour of Port Kembla.

Some lucky people enjoyed a Whale Watching excursion on the Friday after the conference. 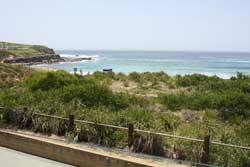 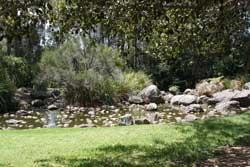 AMSA had its beginnings at the Cronulla labs in 1962. Almost 50 years later the legacy of that small group of marine scientists was again in NSW. A total of 285 participants, 25% of them students, assembled in a rather chilly Wollongong for the 47th annual Australian Marine Science Association conference. With 11 symposia, 9 thematic sessions and 7 open themed sessions, as well as 3 workshops and several 'round-table' discussions - there really was something for everyone.

Proceedings each morning of the four-day event began with a keynote address; Prof. Chris Langdon (Rosenstiel School of Marine and Atmospheric Science, University of Miami) examined the impacts of ocean acidification on coral reef assemblages. Dr Ian Poiner (AIMS) focused on issues associated with Australia's marine biodiversity in recognition of the International Year of Biodiversity. Dr Brendan Brooke (Geoscience Australia) illustrated the utility of abiotic surrogates and finally Dr Graeme Inglis (New Zealand's National Institute of Water and Atmospheric Research – NIWA) scrutinized contributors to the invasibility of marine communities. AMSA Patron, Prof. Joe Baker, also provided his vision of Marine Science beyond 2010. Thanks to all of these speakers for taking us to the 'cuttingedge' of their respective fields. The furthest traveled attendee needs special mention in my view and in 2010 goes to the selfproclaimed 'wandering Scott' – Dave Paterson (University of St Andrews)!

A 'rich' social program is almost as important as the science at any conference – after all the origin of 'symposium' is the Greek verb sympotein 'to dink together'. Hot lunches each day helped to stave off the cold, but were so convivial that afternoon sessions often struggled to begin on time. The 'student night' was apparently lively at the 'The Brewery', while the Conference Dinner was a fitting finale to the event with the Novotel ballroom sporting a strong marine theme. A number of student awards were presented on the night and special congratulations to the Ron Kenny awardees' and the other recipients of student prizes – details of the awardees have been posted on the AMSA website. At the other end of the spectrum Dr Gary Poore received recognition for 40 years in AMSA! Unfortunately, Silver Jubilee awardee , Dr Pat Hutchings was overseas and not able to receive her award on the night. Once the formal elements of the evening were settled and just prior to the band taking us through to the small hours, AMSA 's answer to Paul the World Cup predicting octopus took centre stage. A good natured armwrestle between Spain (Adriana Verges) and Holland (Arnold Dekker) turned into a titanic struggle (just like the actual final!) with Spain just pipping the Dutch. As Paul the psychic octopus and our AMSA members both predicted a Spanish win, it remains unclear which method is superior.....

On a personal note there are several people that made major contributions to the success of AMSA2010. In particular, I want to thank Narelle Hall and members of my lab.; they smoothed the path and ensured that I retained a shred of sanity! I would also like to thank the sponsors of the event and ask you to show them the support that they provided to AMSA. I hope to see you all at AMSA2011 in Fremantle.