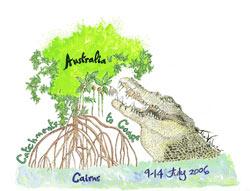 The Australian Marine Sciences Association and the Society of Wetland Scientists held a joint annual meeting in the tropical city of Cairns at the Cairns Convention Centre in July 2006 with the theme "Catchments to Coast".

Catchments to Coast was an international conference, the major focus of which was the vital role and value of wetlands within the terrestrial and marine environments. Importantly, the joint conference provided an international platform for showcasing the need for, and benefits of, a multidisciplinary approach to the complex issues associated with the land-sea interface.

This joint conference brought together the annual meetings of these two major scientific societies and allowed the development of international linkages around the connection between catchments and coasts.

1. The Australian Marine Science Association is the major national professional association for marine scientists from all related disciplines.
2. The Society of Wetland Scientists is the largest professional body of wetland scientists and managers in the world, with more than 4000 members.

There were over 220 talks and 38 posters presented by delegates from the Society of Wetland Scientists and more than 180 talks and 25 posters from delegates from the Australian Marine Sciences Association.
The content of the conference was highly regarded by all delegates. The standard of papers was considered by many delegates to be higher than normal for both conferences which were not only a tribute to the conference attendees but also to the effort put in by the Chairs of the Scientific Program Committees, Prof Colin Field and Prof Jack Greenwood.

Delegates attended from 27 countries. Australian delegates made up more than 50 percent of attendees and delegates from the USA about 25 percent. Countries represented were:

The conference covered a wide range of science, policy, management and education topics. It brought together practitioners from many disciplines and as well as providing opportunities for detailed scientific discussion, also provided opportunity for interdisciplinary discussion and networking.

Focussed sessions at the conference included:

The most significant achievement of the conference was to bring together scientists and managers from a variety of disciplines who do not generally meet at the same forums. This enables exchange of intellectual property and importantly recognition of the relationship of the various disciplines. This integration and recognition of the importance of taking a whole of catchment approach to understanding and to managing wetlands, coastal and marine environments was a message that the conference organisers wanted to give to the community and to broader stakeholders.

The conference attracted significant interest from television, radio and print media and provided an opportunity to present a strong message of taking a whole of catchment approach to understanding and managing waterways and wetlands.

It was one of the largest coastal focussed conferences ever held in Australia and provided many scientists and students the opportunity to attend an international conference.

The success of the conference is best assessed by the reaction of delegates. Many have provided feedback about the exceptionally high quality of talks presented at the conference, about the excellent facilities, the professionalism of the audio visual component, and the well catered opportunities for networking and collaboration.

Many participants from SWS and from AMSA have assessed the conference as being one of the best ever.

One of the major successes of the conference was the high level of support and sponsorship obtained. This enabled us to keep the costs per delegate to a minimum and helped to make the conference affordable to students.